With the infographic shared by ICO Analytics, 11 hacking attacks against decentralized finance (DeFi) platforms have been announced so far.

The crypto money data platform ICO Analytics shared a chart on social media accounts today. In the chart that reveals 11 attacks on decentralized finance (DeFi) platforms so far; information such as project name, date, lost value and how much of it returned to the platform.

According to ICO Analytics data, while the most attacked platform was bZx Protocol, the project with the biggest loss was Harvest. Apart from these, the Maker platform lost $ 8.3 million for the attack on 12 March, and the Acropolis lost $ 2 million, which it has not yet recovered, on November 12, just a few days ago. The Balancer platform, on the other hand, lost half a million dollars with the attack it experienced on June 29, and got its share. 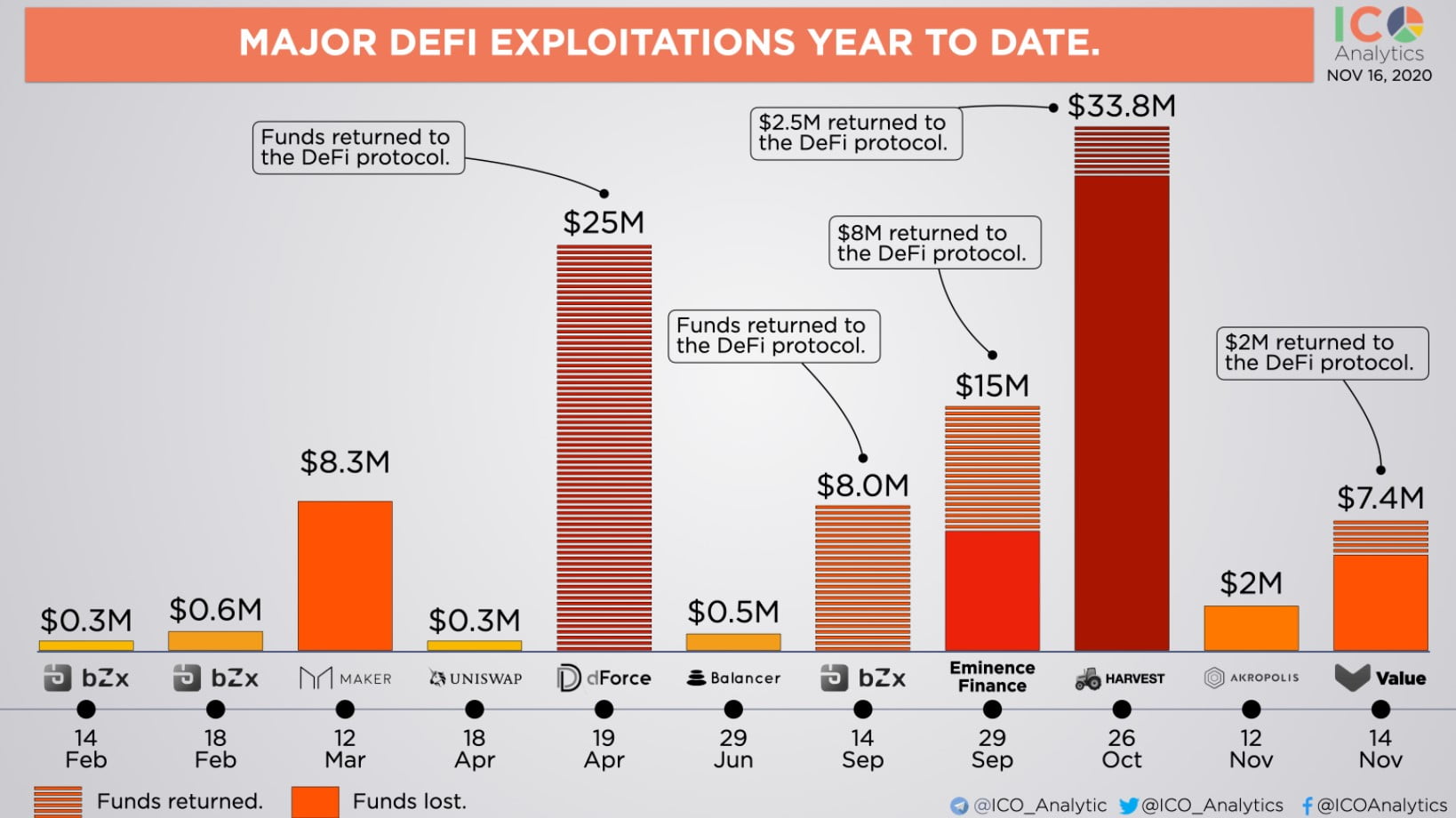 Most attacked and losing duo

Introducing itself as the strongest open finance protocol, bZx suffered from attacks; He lost 300 thousand dollars on February 14th and 600 thousand dollars on February 18th and could not get any of these funds back. The platform was attacked on September 14th; but this time he managed to get back all the $ 8 million he lost. It has been reported that all these attacks occur due to a faulty code in smart contracts.

Harvest Finance, which suffered the most loss as a result of the attack, faced a hack attack worth $ 33.8 million on October 26. It was announced that the computer chora that carried out the attack targeted the protocol’s liquidity pools and carried out an arbitrage attack. The hacker, who carried out his attack in just 7 minutes, then returned $ 2.5 million of $ 33.8 million.

There are also funds saved

DeFi platform dForce, a scalable open finance project that promises integrated interoperability, lost $ 25 million with a hack attack on April 19th. This loss led to the security of the project being questioned by industry followers, while the hacker turned over the entire $ 25 million.

The Eminence Finance project, backed by Yearn.finance founder Andre Cronje, was hacked for $ 15 million on September 29. More than half of the stolen amount returned to Eminence Finance, the $ 8 million fund NFT game ecosystem.

The Value protocol, which aims to bring justice, real value and innovation to the DeFi field with its own words, lost $ 7.4 million in an attack just 2 days ago. Just like Harvest Finance, the platform has only recovered $ 2 million of the funds lost by an arbitrage attack for now.